During you holiday in Curacao our beautiful Punda is not to be missed. Punda is the oldest district of Willemstad. Originally the district was called De Punt (is dutch for: the point), which was translated into Papiamentu (official language) as Punta and later it was changed to Punda.

In Punda you will find the popular colorful houses from the eighteenth century. These colorful houses/buildings are an icon for the island and might be the most photographed objects in Punda.

In addition to the colorful buildings on the Handelskade and the houses on Ser’i Pietermaai there are various tourist attractions in Punda, such as the many historical museums and the shopping streets.

Friday is the busiest day in Punda, because most of the teenagers go to the city after school to celebrate the weekend. Mostly they are just hanging around in their school uniform or eating at a local restaurant. The city is attractive for everyone, not just for the tourists.

Do you want to experience Punda as a local? Then you must visit the Floating Market, Plaza Nobo and Plaza Bieu! These are the most local sights that you will see on the island. At the Floating Market you can buy the most delicious fruits and vegetables (all imported from Venezuela). At the Plaza Nobo you can see locals selling their own farmed products or delicacies and at the Plaza Bieu! you can taste the most delicious local food in a local environment.

Every day starting from 9 o'clock in the morning until 1.00 o'clock in the afternoon locals will go shopping for their fresh food. It’s the busiest place in the city. After 1.30 pm you’ll see everybody heading home for their afternoon nap, Siesta! Punda is not that big, in half a day you have seen it all! Yet it tempts you to go there every day. It is not just a neighborhood, it is so pleasant there! It brings people together and makes people happy. From the many cafés on the Handelskade you can spend hours gazing at the huge cruise ships that moor in the Sint Anna Bay.

You will always see people in Punda somewhere on a bench looking for a shade. Yes, because locals do not like being in the sun. When you're wandering in the city, you can start a conversation with a local by just simply say: Solo ta kima, no?! (It's very hot, ain't it?). And believe us, you will make new friends! Not only because they'll agree with you, but also because you said some words in Papiamentu! 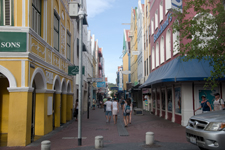 Once in Punda you'll also have to visit the famous Waterfort Boogjes. At the Boogjes there are several restaurants where you can have good lunch and dinner. It’s a wonderful location close to the water. You can enjoy a beautiful view from the restaurants. You can see all the many ships entering the St. Anna Bay and the beautiful birds that flies by. The Boogjes are a piece of Punda that you should not miss. They are located just behind the Fort Amsterdam and are easily accessible.